When my two little savages moved in I struggled with the idea of spending money on cat stuff. Cats are notorious for ignoring the toy and moving into the box.

Cat trees (or cat condos, or whatever) aren't cheap. $100 for a box didn't seem to attractive.  I got the thing and they were all over it even before I had it fully assembled.

Flash forward about a year. They clawed completely through one of the base posts and the tree collapsed. There was more sadness than usual in Der Furrybunker.

I'm happy to announce the arrival of the new cat tree. Much yay!


They're much happier now.  I think next year I'll pre-order the replacement. I'd rather spend $100 on something they'll destroy than have them destroy everything else. And when I walk over to it they run over and jump up to get petted and to be told what wonderful little angels they are.

Speaking of cats, I got a cordless vacuum and on the first day of use gathered up what looked like a third cat. Not bad considering that I have an Orek I use once a week or two. Funny thing though, these two are absolutely terrified of the cordless vac. If they just see me taking it out they hide under the bed for an hour. Which sucks for them because the whole point was to be able to vacuum up the occasional (daily) oopses.

The Rabbit-Hole of Atmel Fuses

You finally resort to plugging things in at more-or-less random, fire up Atmel Studio and blunder your way through creating a new project, importing blink and compiling.

Eventually, by a combination of persistence, web searches, document-diving and sheer chance you come upon this window: 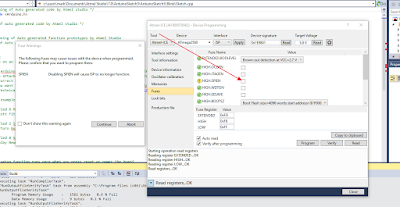 Let me point out a couple of things that might save you some heartburn. First off, an empty checkbox means enabled. Neat, huh?

Second, the HIGH.SPEIN can be disabled, but once you've done so there is no going back without a high-voltage programmer. You get a warning as shown in the screen cap, but the warning makes no mention of the permanent nature of the change. My muddled understanding is that the fuse is set to prevent re-programming of production units. A neat feature but so poorly documented that you'll probably brick one or two MCUs before you get the point. I can still program my sacrificial Arduino Mega via Atmel Studio and the ICE but programming via USB no longer is an option.

I'm not alone in my bewilderment and frustration with Atmel. Watch this video and listen closely, particularly his instructions at 2:22.

Pay heed or pay for a high-voltage programmer.
By Mark at June 21, 2017 No comments:

If you've ever wondered what's inside a DHT 11 temperature/humidity sensor, I'm here for ya'.


The die is about 1/16th of an inch across. Click the picture for a larger version.

Don't ask me how, but I managed to kill the three sensors I had around from various kits. In the process of building a remote temperature/humidity IoT node, I was able to test all three. I even swapped out the NodeMCU the node is based on with no joy. I bought a DHT 2 to replace it (livin' large, 7 bucks vs. 2) and that works so I figured I'd dissect this one for science fun.

There's an unmarked chip on the back and a thermistor somewhere in the package.

I got a new toy and brother, this thing is a blast. It's an Opti-Tekscope OT-M HDMI Microscope with Camera and it's as much fun as you can have with your clothes on.

I've always loved looking at pictures of small things and have often wished I could see some different things under a microscope. This microscope does what I got it for (identifying and soldering small parts) and it's a fair compromise between cost and capability.

So let's look at something small!


Above is a photomicrograph of a Color Light-to-Digital Converter with IR Filter from AMS. It can be used in things like robotic sock-sorting machines to differentiate different colored socks. I'm working on such a machine now. Since all of my socks are black I'll bet it works.

There are small light sensors under the color filter squares. The light intensity of each sensor is combined and converted to a digital signal that is sent to a computer or microcontroller.

Below is what it looks like mounted on a breakout from Adafruit. The part in the photo above is outlined in green in the photo below.

Each colored square in the photomicrograph is about 0.004" across. I don't know what that is in human hairs but it's pretty darned small. There's also a lot of other things built right onto the chip, which is pretty amazing.

So there ya' have it. Yay for small!

More about the AMS color sensor can be found here.

One of the downsides to Raspberry Pi is Arduino. Arduino is everywhere. Every time I looked for some Python code for the RPi I found dozens of links to some C/C++ for the Arduino. So I finally broke down and spent the ten bucks for an Arduino. And to show how Arduino-ignorant I was, my first question was 'what O/S does it run?'

Turns out Arduino has no O/S.

Ignorance, as they say, is curable, so I took a week off and got acquainted with this little beast. One of the projects I was interested in trying was using a device that combines an accelerometer and a gyro in a single chip to manipulate a 3-d graphic image.


And I got it working. Yay!


If you want to give this a try, start with the instructions and links here from YouTube user PlyAlex.

There are tiny Arduinos and this chip uses very little power, so making cat-compatible projects are practical.

Poor Alfred. I've started being a little stricter about dinner. I'm pretty overweight so of course the cats are on a diet. Dora doesn't seem to mind too much. She hates when I refer to her as 'Charging Rhino Haunches' or 'Thunder Thighs' and I started putting small wall mirrors at floor level.  She also seems to understand that dinner will eventually be served.

Alfred on the other hand is less secure. He meows and I meow back. Or moo, which just pisses him off. I tap the partially-full food dishes with my toe and point and tell him to go eat what's in the bowls and stop asking for more. He stretches up to the counter when I get something for myself to eat. And then he pouts and starts acting as if Herr Fatguy will never feed them again.


Or maybe I'm mad and getting ready to sell them to the itinerant Canadian fur traders that must be in the neighborhood.

I had to comfort him and assure him that cat fur isn't really worth all that much and that he would indeed live to eat again. It took a little while but he seems to have chilled out a little.

I was careful to not mention the recent increase in demand for cat organs in the underground cat transplant market. I'd probably never see him again.
By Mark at March 26, 2017 No comments:

I held off upgrading my Windows 7 Professional PC to Windows 10 for fear of breaking everything. Not that that's ever happened, but I hate having a gun held to my head.

Screw you. I'll upgrade when I'm good and ready. And I still have CRTs.

Well, a good thing may have come to me who waited. According to Microsoft, 'If you use assistive technologies, you can get a free upgrade to Windows 10 as Microsoft continues our efforts to improve the Windows 10 experience for people who use these technologies.'


Left undefined is exactly what constitutes an 'assistive technology'. I use a mouse to assist me moving the little pointer around, so I gave it a shot. I went here and followed the instructions. No registration, no questions asked. After a 3GB+ download and the usual upgrade gyrations, voilà!


All the usual crapware was there and I had to break out other assistive technologies to pry out OneDrive, Cortana and Xbox, so I'm guessing it's a legit copy.

So yay for me!

And I'm still waiting for the free LCD upgrade program...

My Cats Are Running Der Furrybunker

I should have named Dora 'Oprah'. Big, black and bossy. And scary smart. Just like Oprah except Dora's as poor as I am.

They sleep with me every night, each in his or her own spot. They both insist on being held all the time. Alfred just randomly jumps up on me, which is usually fine - except when I'm standing up. If I get advanced warning I can catch him. But sometimes I'm not looking and there he is, on my chest looking at me as if saying 'please hold on to me!'.

He'll run to my desk chair when I walk into the living room and jump up to look at me and wait to get petted and picked up. Purring the whole time. One time I walked over and looked at him and asked what he was doing. He made the motions of getting ready to jump up on me so I patted my chest and he launched right up. The little dude's like a flying squirrel. It's especially amusing when he miscalculates and bounces off of me. I'll get him some goggles and a scarf and call him Rocky.

I used to be nervous about getting laid open but he has a remarkable instinct about not clawing me, just whatever I'm wearing. A little rough on pants and shirts, but that's ok. He's worth it.

Dora just sits on the arm of the chair and head butts me. If I ignore her she body slams me. And she can body slam, sheesh! Finally she'll make like she's going to climb up on my shoulder. By that point I'll sit back and she'll lay in my arm so I can scratch her belly.

They don't carry on when they're hungry - or think they may be soon. They're much more subtle. They just take their food dish and move it in front of the coffee maker.


Dora has discovered the wonders and joy of shredding toilet paper, paper towels - and $20 bills. I rescued the 20 before she got far with it. I had to hide the paper towel supply. And I hold her more often so she's less inclined to express her displeasure via tissue misuse.

I'm working on getting the camera setup on a tripod with a remote shutter release. It's harder than it sounds because I never know when to have everything setup and the lights on etc., etc.

And, of course, any time everything is setup they're both nowhere to be seen.