Looking Around at 360-Degree Photography

Winter has finally arrived. Late fall, anyway. It's been cold enough to turn the heat on and the cats are trying to sleep in my armpits to stay warm. They've been huddling in their heated cat bed and I've deployed the electric blanket on my bed. Now to find some heated gloves.

My Aunt Terry has picked up the filthy habit of photography - and yo, she's good! She's finally broken the bonds of Facebook and has a gallery on 500px. Check it out, there's some good stuff there.

I've acquired yet another filthy habit of my own, 360-degree photography. I set up my own web server to host the output here. Be patient, it's on a Raspberry Pi 3 on my pokey home internet connection, so it takes a few seconds to load. Actually, I think the bottleneck is the add-on crap for WordPress I installed but I like the stupid little 'share' buttons and all the other bling that'll probably never get used.

The Ricoh Theta S is a trip to use. No viewfinder or any way to change settings on the thing itself, as everything is done on (what else) an app on your smartphone or tablet. But since you need to hold it at least at arm's length, this actually make a lot of sense. The camera has a shutter release, power and still/video selection buttons.

I've been underwhelmed by the image quality so far but then my expectations may be unreasonable.

There are two lenses and two sensors. Each lens casts a circular image on the sensor and the firmware stitches everything together into a single, rectangular image. The output is strictly jpg, no RAW. You can use full auto, shutter or ISO priority or manual. It has settings for DR compensation, noise reduction or multi-exposure HDR. But you can only use one of these options at a time.

It also shoots video but I haven't played with that a lot yet.

Processing appears to happen in the camera, not the controlling device so any improvements would need to be pushed out in firmware updates.

But the spherical images are very cool. The images are transferred to your smartphone via WiFi and you can do the whole VR thing. Great fun! You can look in any direction, even 'behind' the camera, up/down...anywhere. And you can zoom in and out.

If you want to break out of Ricoh's 'ecosystem' you'll need to figure out what to do with the images.  Below is the jpg of one of the VRs I posted, W Market and S Highland. You can click on it for a closer look. 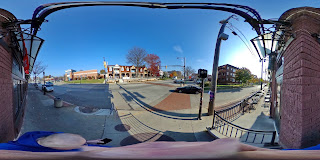 Other than some mild noise reduction this is pretty much what came out of the camera. You need software on the server hosting the image to display the image correctly and with the appropriate navigation controls. Can't do that on Blogger. Or on Flickr or 500px. Or Facebook, Snapchat, Twitter etc., etc.

As I recall, you can create Photo Spheres for Google Maps' street view without additional software. (That's how I found out about this camera.)

Ricoh has a site people can post their VRs on. You can then embed a player on social media sites, but you don't get all the navigation controls.

I'm sure there are other options but I latched onto software called Pano2VR. They have a WordPress plugin that works great with the Theta S' output. It also lets you patch the nadir so you don't see the photographer or tripod.

Then you need a WordPress host. But installing Linux, Apache, MySQL, PHP (LAMP) and WordPress on a Raspberry Pi 3 took less time than exploring the hosting options. I'm not kidding, check out the instructions. It worked for me on the first try. Well done, Raspberry Pi People!

I'm probably doing things the hard way but I'm curious how it all works and I like to have control over layouts, ads and all the pointless website bling.