Today while monitoring USAF HFGCS on 8992 kHz USB I started hearing the signal in the YouTube video below. Not much to add to what's in the video other than I've heard it before and decided to record it. The first minute or two should suffice, unless you know or hear something something I don't. It seems repetitious to me.

My best guess is that this is an OTHR. Sounds similar to samples here: http://www.sigidwiki.com/wiki/PLUTO_II_OTH_Radar

Naaman's Expectations and the Mission of Catholic Universities

Last Friday in our Abbey Church there took place the installation of Dr. Michael Brophy as President of Benedictine University. In the homily at the Mass of the Holy Spirit, Abbot Austin recounted the tale of the leper Naaman coming before the prophet of Elisha, hoping to be cured. At first, though, he rebelled at Nathan’s command to wash in the Jordan River. Why was he offended at the request? Abbot Austin explains, and then goes on to apply the lesson to Catholic education in what I think is a very useful way:


“What Elisha suggests is too simple, too plain. It doesn’t meet Naaman’s expectations. But Naaman’s servants reason with him, telling him to do it – all the more because it is so simple. So, he does and he is cured of his leprosy. Naaman at first had not been able to recognize the gift right in front of him. It was too simple, too plain – not according to his idea of things.

“This speaks – I would say – to the mission of Catholic universities. The intellectual life, the life of the mind, is a wonderful thing: to seek what is true, to have discussions and conversations about such things with colleagues and peers – these are the things we are blessed to do on our campuses. In this intellectual life, we seek the truth, we seek wisdom. But what if the Truth and Wisdom itself took on human flesh and stood before us? That is of course what Christians believe: that the Truth we seek became a human being like us: Jesus Christ.

“To accept the Truth itself, now become a human being, is to believe in Jesus Christ. It is to have faith. Yet smart people (and this has been true throughout history) struggle with this. Faith can seem too simple, too plain. So, they reject it.

“One of the great thinkers in history was St. Augustine – a very smart person. But for all his smarts, he admits that at first, as a young adult, he was too proud to practice faith. That was for simple people, for rustics. He would rely only on the mind, only on reason. So he tried to do before his conversion. Yet he wrote his great works, the ones that continue to contribute to theology, philosophy, history, law, and other topics, after he accepted faith.

“The mission of a Catholic university is based in faith. It’s based on faith in Jesus Christ and His message as it comes down to us through the Church. Now, I know that such a statement can be qualified and nuanced. And that’s all good. It’s what we do as academics. But still, I submit, it is true that the mission of a Catholic university rests on faith in Jesus as the Truth become human and whose message continues through the Church. Take away the Catholic faith, and you no longer have Catholic education. This faith accepts that the Truth, which we seek, has become a human being.

“For many smart people, this is a paradox. The faith is too simple, too rustic; for them, being smart means being sophisticated and complex. Yet Catholic education embraces this paradox – or what seems to be a paradox to many.

“Faith is in a way simple. This is not to say that it is easy, but in a way it is simple. Because the proposal of faith is simple, humility is required to accept it. Catholic education, if it is true, has the humility to accept faith.

“Of course, in the Catholic view, there is no opposition between faith and understanding. In 2001, the great moral philosopher, Elizabeth Anscombe, died. She was a profound Catholic thinker, who was born in Ireland and taught in England. It is said that C. S. Lewis never lost a debate except to her. She was brilliant.

“But I remember reading an odd article about her upon her death. The article said that she had the faith of ‘a devout French peasant’! This was not a compliment and the article presented it as an enigma: How could someone so smart and intellectual have such a devout faith? But from a Catholic perspective, there is nothing odd about it. Faith helps, strengthens, and supports the intellectual endeavor.

“I said that faith requires humility and, so, perhaps the following image could be used. Saints have noted that if you want to build a high building, you need to make the foundations deeper. And if a tree is to grow higher, it needs to sink its roots deeper. Having the humility of faith is the foundation; it is sinking deep roots in the ground. Reaching high into the sky, that is the attainment of understanding.

“This, I would suggest, is at the heart of a Catholic university. Going deep in the humility of faith; reaching high into the sky through understanding.

I'm starting to wonder if Dora's mute. I stepped on her paw this afternoon and she didn't scream. Or meow. Hmm. Oh, well, she certainly has other ways of making herself known.

She lay in my arm for over an hour this morning while I listened to the news.  Just snuggled in and purred. Every now and the she'd look up at me to remind me to pet her. Sometimes when I work at my desk she gets very insistent about being held. She'll sit and watch YouTube videos with me or stare at the Bunker Cam video. Other times she follows me around.

Alfred's getting a little better about being a portable cat. We did a little Super Cat training this morning. Super Cat training consists of 'flying' a cat around then (gently) tossing it onto a soft landing, like a bed, while saying 'Soooper-Cat!'. I'm going to have to get him fitted for his cape pretty soon. He's also getting less afraid to roughhouse with me a little bit.

They both love to get their bellies rubbed. And, oh, the birdie toy! I have the two broken toys on a shelf. Every time I go near the shelf they come over and stare. They're just sticks with an elastic string. The birdies are broken off. But they know there's at least one left. And they really want it.

I got an urgent email from the internet asking me to please, please find another hobby or at least another subject as there is now a vast surplus of cat photos. I'm working on a reply.

It'll probably have at least one cat photo attached.

Three Stages in the Life of a Young People

Email ThisBlogThis!Share to TwitterShare to FacebookShare to Pinterest
Labels: Chesterton

No Blankie, No Peace

I tried taking the kid's blankie away and they decided to 'occupy' my chair.
The blankie's back. <sigh> 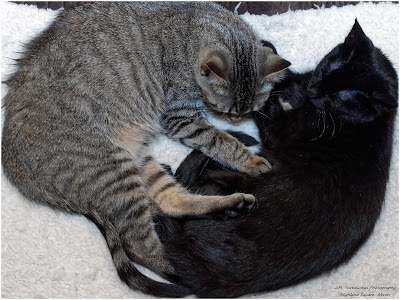 I was hoping the cat tree/condo would suffice, but no.

They're growing. Dora really is a little princess and Alfred really is a dork. Dora's teaching me to play fetch. I'm older and it'll take some time but I'm sure I'll catch on. Alfred just jumps up in my lap and squirms and purrs.

They're both the bestest kitties on the planet.
By Mark at April 07, 2016 No comments: