I heard about Metrojet Flight 7K9268 crashing in the Sinai Peninsula and decided to check out the airport it took off from, Sharm el-Sheikh International, on Google Maps. Not much to see but I did notice something I'd never seen nor heard of.


If you zoom in to either end of the strip the pin is centered on you'll see what I'm talking about. 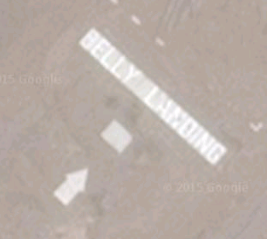 Yep, their very own dedicated 'Belly Landing' strip. Just the kind of thing I'd want to see when landing. And I'm not sure, but it looks as if it's been used. Hmm.
By Mark at October 31, 2015 No comments:

If you're getting started with software-defined radio (SDR) be prepared to find yourself needing yet another connector adapter or pigtail as you try different pieces of hardware in different combinations.

And they all come in male and female.

If you pay attention you'll usually be able to find the adapters or pigtails you need for a particular project without too much worry.

But beware RF SMA vs. RP SMA! Yikes, what a pain in the hindquarters. I've been playing with RF for a few years but SMA is pretty new to me so I've been burned a couple of times lately by the RF/RP incompatibility and wanted to save someone the time, money and frustration if I could.

The long and the short of it is - RF=YAY, RP=NAY. RP stands for reverse polarity and will not work with RF SMA.

Unless your hardware specifies otherwise, if the hardware uses SMA connectors you more than likely need the RF variety of SMA connector. And don't rely on the description. Look at a picture and see if there's a pin where there should be.

I'm not including more detailed explanations or photos since there are hundreds of both all over the internet. You can start with this Wikipedia article and go from there.

While watching my DUMP1090 page tonight, I noticed a KC-135 out and about. This is the track for tail number 58-0117, based at Pittsburgh International and operated by the 171st Air Refueling Wing. 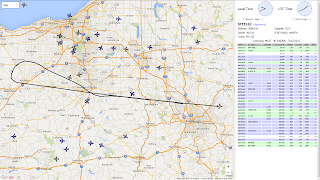 These things - the planes, the radio and computer technology and the behind-the-scenes peek at military operations - all fascinate me.

I can't help wondering what the crew was thinking. Is this kind of operation a royal PITA or it it a real kick? I wonder if it was loaded with fuel or if it was doing any air-to-air refueling tonight. And that particular aircraft is 43 years old, which is probably almost twice as old as the average crew member. What does any plane in regular use look like inside at that age?

Did you get a cow today? Well, I did, because I'm special. And if it's helmet-and-little-yellow-bus special, so what? 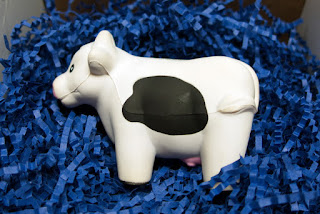 Yes, indeed, an adorable little foam rubber cow to adorn my work stall, watching to make sure I choke on my next cheeseburger. Packed in her own pasture of succulent blue grass, no less. No mere Oxen in a Boxen, this Di-vine Bo-vine travels in style. No Mean Holstein, she's Cattle you can't Rattle, the Fairy of the Dairy.

We haven't had a chance to bond yet so I'm still deciding on a name.

All kidding aside, I am truly touched. Thank you.

I'm so proud, I finally got Asterisk/FreePBX up and running on a Raspberry Pi with a Google Voice trunk. I used Incredible PBX and a lot of Google searches. It's taken weeks of on-again, off-again effort.

If this sounds like your idea of fun be prepared to take two steps forward and three steps back. I've had innumerable false starts and it really still isn't working right. Mainly the network config is boogered up. But it's functional enough to make a backup image of the SD card as a milestone image.

I couldn't wait to show it to my coworkers and generate some traffic to see how it would behave. We work in the telco industry so I wasn't out to impress anyone, just more of a hoot as far as anyone else is concerned.

I was completely unprepared for the reaction. About ten people have called in and listened to the IVR and to a person they describe the voice as 'creepy'. I used the stock install of Flite. Like the page says, it's fast and free. What they don't tell you is that the default voice apparently freaks everyone out, too.

And that's the part that kinda' bothered me. One person said she wasn't surprised by that fact and it didn't bother her that I wasn't bothered by it. (She's that kinda' grrrl.)

Another friend said she thought it was saying her name. 'Sincerely' came out close enough to 'Kimberly' to make her wonder.

I've got a lot of work to do. Another buddy is planning on setting up an Asterisk server and wants to network the two together. I still need to suss out the network tangles and figure out how to get a packet capture going. I'm not sure the RPi has the horsepower to run tcpdump on top of everything else. I'll probably end up scrounging a managed switch somewhere.

And that voice. Flite has some other voices that I'll have to check out. I just don't want to use my own voice.

Ain't no Pi like Raspberry Pi. Affordable, cheap, and cost-effective. And best of all, they don't cost an ARM and a leg.

These little beasts are simply adorable. Small enough to fit in an Altoids tin, powerful enough to run an Asterisk server and with the right hardware you probably could get one to leap over tall buildings.

I got my first one to build a DIY ADS-B receiver. More on that later. I have some *NIX experience so the O/S wasn't a big hurdle. And as a nice bonus, the Linux GUI has improved greatly over the past ten years so it's easier to slowly adapt to the dreaded CLI. The kits have everything you need to get up and running in 15 minutes. There is a bunch of easy to follow on-line documentation and loads of open source software.

Perfect way to get up to your elbows in hardware or software development.

Right now I'm trying to get Asterisk to work reliably on a Raspberry Pi. Definitely a steep learning curve for me. I know just enough to be dangerous about all the aspects of the project. As should be expected with any open source hardware and software, this is not a plug-and-chug proposition.

But, hey - that's how you learn and that is actually the point of the whole project!
By Mark at October 11, 2015 No comments:

If you need to access *NIX files from a Windows PC, take a look at WinSCP. I use it to transfer and edit files on my Raspberry Pis and Mac. It just works. And it's free.
By Mark at October 10, 2015 No comments:

Hey, I Woke Up

Hey, I woke up. Yay. While I was sleeping and having a dream that I was going to have brain surgery the next day, someone in Akron was getting shot in the scrotum. He's also got a statewide pickup warrant from Ohio State Patrol so once they patch up his family jewels he's going to be hobbling into jail. He was described by the cops as covered in tattoos. The scene on Romig road was described as covered in blood.

That could easily have been me. Not that I was any kind of a gang-banger. I was too lazy and too scared to be a real criminal. I was always more slug life than thug life. But I was gettin' close.

This dude's laying in a hospital bed with bandages on whatever's left of his testicles, medical staff going back and forth. Strangers coming up and asking questions. A police guard. Nothing to eat. None of his friends.  Probably none of his family. Everyone else can go when they want to but he's stuck. Probably all he wants right now is a smoke and to be home. And it sounds like he's not going to be home for quite awhile.

God bless him. Thank God he's still alive to feel bad. And I thank God that the worst I've had to deal with so far today is wondering if I have enough cash for a pizza and if the salt and fat in it is really that bad.

It's not that I take pleasure in his suffering so I don't feel so bad. It's more the realization that there is suffering everywhere. Always has been, always will be until the end. So maybe I'll be grateful for this cigarette and coffee. Maybe I'll thank God that my brain tumor was just another stoopid dream. And maybe I'll try not to wear my problems on my sleeve. Maybe when someone asks how I am I'll tell them that I'm on the cutting edge of ecstasy. And at that moment maybe they'll smile at my inanity and maybe just for an instant in that one life there'll be just a little less suffering.