I don't know much about this photo other than it was taken at Dushanbe International Airport in Tajikistan. 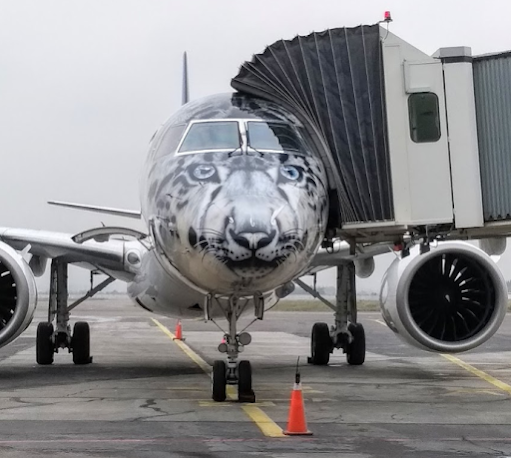 When I was about 5 we moved into a 2-story building. My bedroom windows faced traffic incoming to Hopkins Airport in Cleveland. The planes appeared to be flying directly at me. They were, but a few hundred feet off the ground. The first plane I watched was a jet with a black ball on the nose. I ran downstairs screaming and in tears. When I realized I was still alive I sat for hours watching the planes. Thus began a fascination with aviation. (Hey, that rhymes.)
I can't imagine what my reaction would have been if this guy was the one that came over back then. That is one bad-assed paint job.
Update: This is Kazakhstan’s Air Astana's new (in 2018) Embraer 190-E2.
According to Aerotime Hub, 'The aircraft arrived in a very peculiar livery, portraying a snow leopard. "With this unusual livery, the airline intends to draw universal community attention to the problem of snow leopard extinction and raise environmental protection issues," the airline representatives told ATO. With only around 100 snow leopards left in Kazakhstan, the species is Red-book listed and always under extinction threat.'
If you do an image search for 'Profit Hunter' or 'planes with animal faces' you'll find some other remarkable works of art on airliners.
Meow!
By Mark at August 02, 2020 No comments:

Confused by all the conflicting Wuhan Flu news? I was too until I watched this video:

I just saw an ad for a self-tanning mousse product. Nothing remarkable except the channel I saw it on: Arise TV, a Nigeria TV Live channel.

How do you know when your boss hates you? When they tell you to sell self-tanning mousse in Nigeria. I'll have to find someone in Lagos to tell me what they think of the ads.
By Mark at July 15, 2020 No comments:

Here's a riddle. Cat owners will get it.

Question: Imagine two identical rooms connected by a door. Place a cat in one of the rooms and close the door. Occasionally open the door. Which room does the cat want to be in?

Answer: The other room.

I've lived with cats most of my life and still wonder what goes on between those furry ears.
By Mark at July 05, 2020 No comments:

I love word play and I love me some SpaceX so I get a kick out of some of the names they give to various recovery ships.

Then it dawned on me who must be coming up with the names.

I just heard this on the No Agenda Show: Open a browser and search for any 3-digit number plus the words 'new cases'.

Use any search engine. Rinse and repeat with a different 3-digit number. Ponder the results and ask yourself why anyone trusts the mainstream press. For an analysis of what's going on here listen the the podcast linked to above.
By Mark at June 29, 2020 No comments:

Deleting History Only To Repeat It

What a novel and modern idea to tear down statues and delete people from history.

Well, maybe not so novel. And maybe not so ironic is the fact that today's Vandals seem to have no idea of the history they wish to alter. Given the reputation of western 'higher education' for the past 30 years I suppose that ignorance is to be expected.

President Woodrow Wilson has become the latest SJW non-person. What's funny (as in giggle-worthy) is that President Wilson was one of the biggest liberal/democrat/progressives of the 20th Century. I always thought the guy was a douchebag but I never wanted him erased!

In ancient history, stretching back to the dim morning twilight of the 2000's, the Taliban (remember them?) blew up some Buddha statues because Buddha was such a flaming infidel and the whole world lost its collective shit. I remember the breathless coverage, every newsreader sounding like proponents of genocide against the Taliban.

But that was so long ago, way back before #MeToo and MAGA hats.

If you want to really go back in history, the ancient Egyptians defaced statues of the previous rulers as a way of altering history. 'Pharaoh who? Never heard of the bum.' And probably a lot of average Egyptians got their knickers in a twist and debated whether the  obsolete statues should be destroyed or go into a museum.

I'm an old man and I want the old ways back. I want 'my' country back. I'm not just uncomfortable, I am quite frankly terrified. But these cultural revolutions don't happen often. So I'm strapped in on this roller coaster and hangin' on for dear life. I'll just scream like a 12-year-old girl and try to enjoy the ride! lol

The picture at the top has long been a favorite of mine. Don't like someone? Delete him.

I've read an embarrassing number of books about Stalin, Mao, Hitler and the origins of the Cold War and a few things stand out. First, it didn't end well for a lot of people. Historians still debate the number of millions of people were killed by this unholy trinity.

Secondly, all three wanted to drastically alter their respective societies to make those societies better. They believed nothing short of revolution would root out the entrenched evils that were leading their countries to ultimate cultural rot. Considered in isolation, not such an ignoble aspiration. 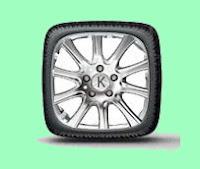 But what stands out more than anything in the context of today's trendy deletion of people who may have retroactively offended us is how traditional this really all is. Sometimes I feel like we're watching someone drill a hole in a disk and yell in glee 'Look! I've invented the wheel!'

Maybe it'll be moar rounderer this time. Or maybe not.

King Solomon (or whoever wrote Ecclesiastes) was right when he said there was nothing new under the sun.